Naira Marley To Know Fate On Evidence Against Him, May 13 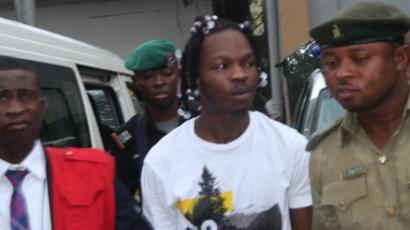 Justice I. Nicholas Oweibo of the Federal High Court, Ikoyi, Lagos on Friday, February, 2020, adjourned till May 13, 2020 for ruling on the admissibility of documents brought before the court in evidence against Azeez Fashola, a.k.a Naira Marley and for continuation of the entertainer’s trial for his alleged involvement in credit card fraud.

Naira Marley is standing trial on an 11-count charge of conspiracy and credit card fraud, preferred against him by the Economic and Financial Crimes Commission, EFCC.

At the resumed sitting today, February 28, 2020, the prosecution through its second prosecution witness (PW2), Augustine Anosike, an investigator and forensic expert with the EFCC, sought to tender in evidence a compact disc (CD) containing information, analysis and extractions from the defendant’s phone.

During his evidence at the previous sitting, Anosike had told the court that the forensic analysis that was carried out on Naira Marley’s iPhone revealed some shocking evidence against him which were extracted and burnt into a CD, alongside some documents that were printed out.

Prosecution counsel, Rotimi Oyedepo presented the documents before the court and urged the court to admit them in evidence.

The defence counsel, Olalekan Ojo (SAN), however opposed the admissibility of the documents on the grounds that the CD does not have the proper authentication required by law, and therefore improperly obtained, as contained in the Cyber Crime Prohibition and Prevention Act, 2015.

Ojo also argued that there may have been interferences while the documents were being produced at the forensic lab of the EFCC. He finally submitted that the CD does not bear any name, title, department, but a signature which can’t be authenticated.

He urged the court to dismiss the admissibility of the documents.

In his response, Oyedepo said that there was no contravention of Section 39 of Cyber Crime Prohibition and Prevention Act, 2015 as claimed by the defence counsel, as what was sought to be tendered is the forensic content of the defendant’s iPhone that was already admitted in evidence. He added that the extractions before the court are materially relevant to the charge.

He also submitted that the desirability to admit the document overrides its non-desirability because there was substantial compliance with the stationary requirement to admit them.

Oyedepo further told the court that there was no break in chain of management of the exhibit and therefore prayed the court to admit the documents.

Justice Oweibo adjourned the matter to May 13, 14 and 15 for ruling and continuation of trial.