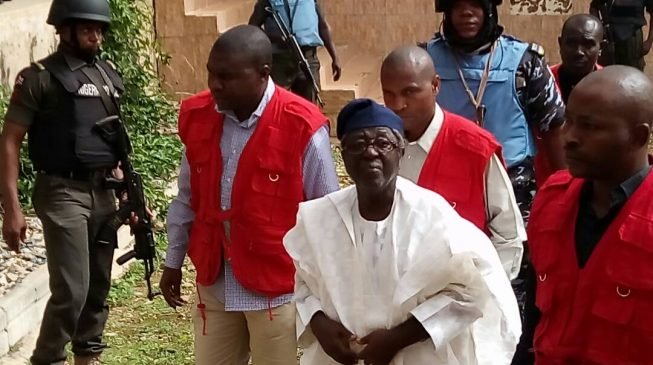 The duo of Jang and Pam are being prosecuted by the EFCC for alleged criminal breach of trust and misappropriation of Plateau State funds to the tune of N30,236,024,219.88 (Thirty Billion, Two Hundred and Thirty-six Million, Twenty-four Thousand, Two Hundred and Nineteen Naira, Eighty-eight kobo).

Before today’s resumption of trial, the matter had been before Justice Longji, who before proceeding on retirement on December 31, 2019, had struck out the no-case submission of the defendants, particularly on the funds for Small and Medium Enterprises, given to the state by the Central Bank of Nigeria CBN, and that of the State Universal Basic Education Board (SUBEB), which were allegedly diverted by the defendants.

One of the charges reads: “That you Senator Jonah David Jang, whilst being the governor of Plateau State and Yusuf Gyang Pam, whilst being a cashier at the Office of the Secretary to the Plateau State Government, between January and May, 2015 in Jos, within the jurisdiction of this honourable court, dishonestly misappropriated certain property, to wit an aggregate sum of N4, 357, 195, 000 (Four Billion, Three Hundred and Fifty-seven Million, One Hundred and Ninety-five Thousand Naira), belonging to Plateau State Government and you thereby committed an offence punishable under Section 309 of the Penal Code Law of Northern Nigeria, applicable to Plateau State”.

The defendants pleaded not guilty to the charges and following their plea, prosecution counsel, O. A. Atolabi, requested for a trial date.

However, the defence counsels for both defendants E.G Phajok, (SAN), and S.G Ode, applied for oral bail application and asked the court to toe the line of the bail earlier granted to the defendants by Justice Longji.

Justice Dabup granted the defendants bail on the previous terms they enjoyed from Justice Longji, and asked the remaining three sureties to file their affidavits to show that they are still willing to continue to be their sureties.