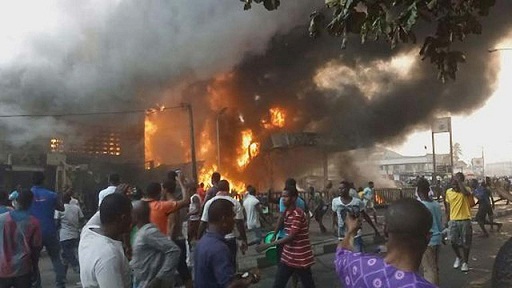 Onitsha Bridge-head market in Anambra State, was on Monday gutted by fire

According to eye witness account goods worth millions of naira were destroyed at the yam, hotel, carpentry and foam sections of the market.

The fire which reportedly lasted for about an hour affected no fewer than 40 shops.

The cause of the inferno could not be ascertained as of press time.

Some of the victims have appealed to the government for financial assistance.

“The times are hard. This is not the best time to experience this kind of thing. We need assistance. Our governor, Chief Willie Obiano, should come to our assistance,” one of the victims appealed.

President-General of Bridge-head Market Traders Union, Hon. Sunday Obinze, while conducting newsmen round the scene, said they suspected electrical fault as the cause of the fire incident

On his part, Secretary of Big Yam Sellers Association, Collins Onwunali, described as enormous the quantum of damage but thanked God that no life was lost.