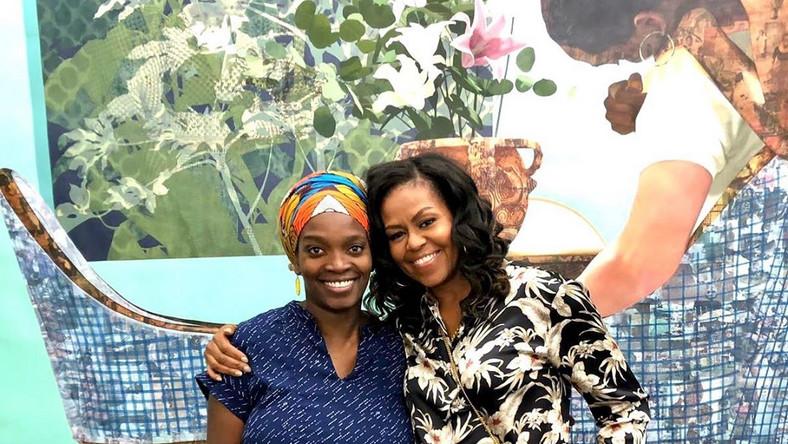 The visit, which happened on Saturday, was made known by Njideka’s sibling,  Chidiogo, via her Instagram handle.

Chidiogo had hashtagged Njideka and posted: “So this just happened! Casual Saturday in the Akunyili Crosby family. When the Michelle Obama pays a visit to your studio!”The acclaimed global artist, Njideka Akunyili-Crosby, was recently profiled in the 2019 TIME Magazine ‘100 Next’ list.

The TIME’s ‘100 Next’ is an annual list of 100 influential people in the world who are actively contributing to changing the world through their craft.

Akunyili-Crosby is the daughter of late Dora Akunyili, who was a former Director-General of the National Agency for Food Administration and Control; and also a former Minister of Information and Communications from 2008 to 2010.

In a blurb describing the artist, journalist Madeleine Carlisle wrote, “Njideka Akunyili-Crosby’s works have sold for millions at auctions.

“But in 2018, it was possible to see one at Los Angeles’ Museum of Contemporary Art free of charge — you didn’t even have to go inside.

“The visual artist was only the second person to be chosen to create a mural on the walls of the museum itself, which was visible from Grand Avenue’s sidewalk.

“It featured brightly coloured scenes of domestic life: in one section, a woman rests her elbow on a table, seemingly deep in thought.

“Akunyili-Crosby — who moved to the U.S. from Nigeria in her teens— is known for such scenes, some of which are autobiographical and incorporate references to both countries,” Carlisle wrote.

In her words, Akunyili-Crosby told TIME, “I’m really looking at how [Nigeria and the U.S.] are complex hybrid spaces.”

In 2018, Akunyili-Crosby made history after selling a painting of hers for the sum of N1.2bn.

Her iconic Bush Babies painting had been sold by Sotheby’s for N1.2bn.