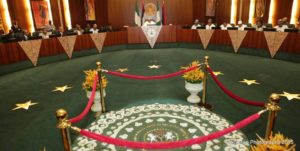 A budget of N100 billion has been proposed for the implementation of the National Livestock Transformation Plan.

The proposal was submitted on Thursday to the National Economic Council by its Sub-Committee on Farmers/Herders’ crisis.

The NEC meeting was presided over by Vice-President Yemi Osinbajo at the Presidential Villa, Abuja.

The Chairman of the sub-committee and Governor of Ebonyi State, Mr Dave Umahi, made the presentation to NEC.

Umahi explained that contrary to the widely held belief, the NLTP was not about cows alone but had three planks, including care for persons displaced by farmers/herders’ crisis and education programmes.

Also, states are free to use any animals of their choice in implementing the programme.

The governor said the committee proposed that the Federal Government would bear 80 per cent of the N100bn, while participating states would support with the balance of N20bn and land for the programme.

He added that the programme remained voluntary and would accommodate only states that expressed participation interest.

However, there is no effective take-off date yet as the proposed N100bn will still be reviewed by the next meeting October before a date is decided.

Meanwhile, Nigeria lost $1.3bn worth of crude oil to theft and pipeline vandalism in the First Quarter od the year.

This was presented to NEC by the Governor of Edo State, Mr Godwin Obaseki.