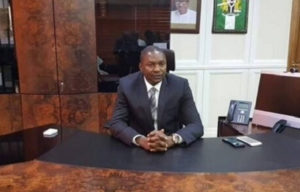 The Attorney-General of the Federation and Minister of Justice, Mr. Abubakar Malami (SAN), said with Thursday’s conviction of Process and Industrial Developments Limited for fraud by the Federal High Court in Abuja, the liability of $9.16bn awarded in its favour by a British court can no longer be enforced.

The British court in August 2019 affirmed the arbitral award of $9.6bn against Nigeria for alleged breach of a Gas Supply Project Contract reached between the Federal Government and P&ID in 2010.

The Federal Government alleged that the contract was rooted in fraud and subsequently instituted charges against the company, which was incorporated in British Virgin Island, and its Nigerian affiliate, P&ID Nigeria Limited.

The court, presided over by Justice Nyang Ekwo on Thursday, convicted the companies after their representatives pleaded not guilty to the charges.

The judge also ordered the winding up of the companies and the forfeiture of their assets to the Federal Government.

Malami said the Thursday judgment was a judicial proof that the contract leading to the &9.6bn verdict against Nigeria was fraudulent.

He said Nigeria would meet with its legal consortium early next week in the United Kingdom in preparation for the case listed for September 26.

He said, “The implication of today’s conviction is that Nigeria has a judicial proof of fraud and corruption as a foundation of the relationship that gave rise to a purported liability in the arbitral award.

“A liability that is rooted in fraud and corruption cannot stand judicial enforceability.

“Nigeria now has a cogent ground for setting aside the liability.

“Nigeria is meeting with is legal consortium early next week in the UK in preparation for the case listed for September 26.”