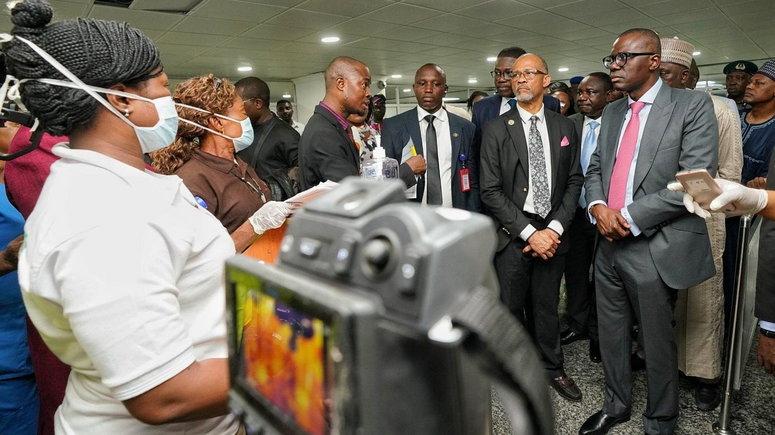 Lagos State Governor, Mr. Babajide Sanwo-Olu, on Tuesday, made a surprise appearance at the Murtala Muhammed International Airport (MMIA) to personally assess how the response team stationed at the Lagos air border are screening inbound passengers for the coronavirus.

At 3:30pm, the Governor arrived at the airport in company of some members of the State’s Executive Council.

Upon learning of Sanwo-Olu’s presence at the airport, the Director of Airport Operations, Federal Airport Authority of Nigeria (FAAN), Captain Mukhtar Muye, and General Manager of Aeromedical Standards, Nigerian Civil Aviation Authority (NCAA), Dr. Wilfred Haggai, stepped out of their offices to receive the Governor, who is the Chief Incident Commander in the State.

The aviation personnel led the Governor and his entourage to the airport’s arrival lounge for an on-the-spot assessment of the techniques being used to screen inbound passengers by a combined team of airport officials and health workers.

It should be recalled that Lagos State Government deployed 30 healthcare workers to the airport to strengthen the effort against the virus. Additional 30 personnel were recently added.

At the arrival gates, Sanwo-Olu watched how passengers were being screened by the airport officials, who also demonstrated measures put in place to isolate travellers that showed signs of illness.

Afterwards, the Governor was conducted round the testing stations and quarantine facilities built in the airport to manage travellers with infectious diseases.

Expressing satisfaction with the response measures, Sanwo-Olu said his visit to the airport was to have a first-hand experience of the screening process after Federal Government triggered advanced vetting of air passengers.

He said: “This is really a working visit to the Lagos airport, which is the biggest international border of the country in terms of number of passengers. We are here to personally ascertain how our officials are working in collaboration with airport authorities to isolate travellers with cases of infectious disease.

“It is no longer news that we have an index case of coronavirus, and as we speak now, we are conducting tests on a few others cases. What it means is that, we need to heighten our level of preparedness, monitoring and engagement. We are also here to encourage and motivate our teaming staff engaged in this difficult national assignment.”

Sanwo-Olu charged the airport workers not to relax the screening process, stressing that all travellers coming into the country, regardless of status or age, must be vetted.

He added that there must be no VIP passage for anyone at the airport, saying everyone must subject themselves to screening. He cautioned the response team against stigmatizing any passenger, who may be showing signs of infection or ailment.

He said: “Since we are still being friendly about accommodating international travels, we need to keep up our gird and remain firm on the screening process at the airport. We need to ensure that we are not keeping our eyes away from anything. Everybody coming in through our air borders must be properly screened. Nobody must be spared from thorough screening.”

Sanwo-Olu said his Government remained committed towards the efforts being made to combat the ravaging coronavirus. He said the State Government would not hesitate to make resources available to enhance the level of preparedness towards combating the ravaging virus.