Ayade, Robotics and Artificial Intelligence: When a Trailblazer Receives Validation 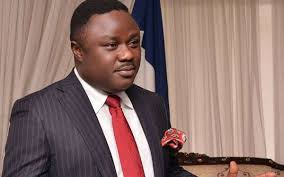 There are men who see tomorrow. Such men are rare gems and they are few. They are trailblazers and most often misunderstood by some fellow countrymen still stuck in the old normal of yesterday.

Cross River state governor, Professor Ben Ayade falls in the above bracket. Blessed with fecundity of ideas and innovative spirit, this Professor of Environmental Microbiology has a keen eye for tomorrow.

This can be gleaned from the child of his brain and the product of his ingenuity, the Ministry of Robotics and Artificial Intelligence.

Governor Ayade has the presence of mind to realize that the future of science rests with Artificial intelligence hence his decision to frog- leap Cross River into that uncharted course by establishing the Ministry of Robotics and Artificial Intelligence.

Some of the hallmarks of visionary leadership is iron-cast will, possession of strong character and the ability to side- step the lure of populism to take tough decisions for the overall, long term benefit of the people. Ayade clearly showed the above traits in establishing the Ministry of Robotics and Artificial Intelligence.

No sooner had he announced the setting up of the new Ministry than short sighted critics derided him. But they can be forgiven. Throughout history, people war against new visions and new ideas, especially when such visions and ideas are strange and do not synchronise with their anachronistic mindsets or try to torpedo them.

However, the good news is that being the strong character that he is, a leader who seeks not cheap popularity by going for applause- attracting soft ideas, His Excellency resolutely brushed aside the avalanche of opposition that greeted the setting up of the Ministry to see it take off.

And now his decision has gotten validation from the Federal government that recently announced its decision to include Robotics and Artificial Intelligence in the country’s school curriculum.

This is nothing but a wholesale validation and endorsement of governor Ayade’s far- sightedness in that branch of study.

It is a firm and heartwarming endorsement by the federal government of the establishment of Robotics and Artificial Intelligence Ministry in Cross River state.

Here, the federal government is on the same page with Professor Ayade in terms of breaking new grounds in the advancement of science and technology.

According to Minister of State for Education, Emeka Nwajiuba, federal government would work on the inclusion of coding , robotics and artificial intelligence into the country ’ s school curricula so as to take pupils to the 21 st Century technology and educational standards, noting that the country’ s 104 Federal Unity Colleges had been given a directive and would be the first to adopt the coding and robotics programme.

Nwajiuba: “The world of today and that of the foreseeable future is one where individuals move between digital domains and offline reality with the use of technology to enable and manage life. This will enable the country to empower and fully equip the youths to be players at the emerging Fourth Industrial Revolution skills to get them ready for the future”

Nwajiuba’s postulations above are in tandem with governor Ayade’s brilliant expository as to why Robotics and Artificial Intelligence Ministry has become imperative for Cross River.

A scientist himself, Professor Ayade believes that to choose to remain static in a world that is in constant state of flux technology wise is the great disservice any leader can inflict on his people in the 21st century.

Ayade is one of the very few digital world leaders who believe every facets of human endeavour in the 21st century should be technology driven.

No wonder his massive Agro- Industrialisation drive in Cross River has its locale in tractorization, mechanization hence his insistence on farming without sweat. “If you have to sweat in Cross River, you don’t sweat because you are tilling the soil, you sweat because of pleasure because machines will be doing your job”, he says

Ayade’s stand on Robotic and Artificial Intelligence clearly establishes him, as they say in pidgin parlance, as “man wey sabi”

Ayade: “The world today has moved to the first generation which is artificial intelligence and robotics. In this you are dealing with very sophisticated technology, the future where people will just sit down and take a robot to become a farmer. Difficult things that man cannot produce, robots will take over. You take artificial intelligence, people will begin to produce things that otherwise would have been found too cumbersome. The world is on the move, to the extent that you see a car drive through a tollgate without stopping and yet pays the toll.

“Young generations of Cross Riverians, who are into software will partner with Microsoft and work with the Ministry of Robotic and Artificial intelligence to create a new intellectual platform that will drive the future of Cross River.

“Vehicles today drive themselves without any driver, so how is Cross River State preparing herself for that future?”, he asked.

According to research, Artificial intelligence was founded as an academic discipline in 1955, and has experienced several waves of optimism.

The field was founded on the assumption that human intelligence can be so precisely described that a machine can be made to simulate it.