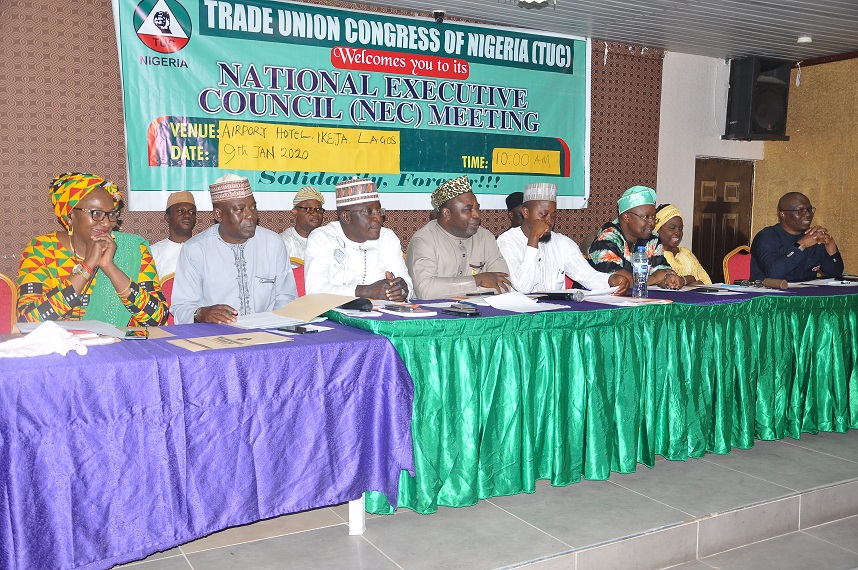 Trade Union Congress, TUC has condemned the alleged plan by the Revenue Mobilization, Allocation and Fiscal Commission to review the remuneration of political office holders.

According to a statement signed by TUC, President, Qudari Olaleye and Secretary, Musa Lawal- Ozigi, increasing the salaries and allowances of political office holders when the local and foreign debt is overwhelmingly high smacks insensitivity.

“The country is grappling with a lot of economic issues. This is a conspiracy that must not be allowed to stand because of the dire consequences it will further have on the economy, people and our collective image.

“Does it mean the Federal Government increased the Value Added Tax (VAT) to raise money to pay the politicians”, TUC queried. TUC said some countries in Africa now have a unicameral legislature because their former system was eating deep into the national treasury, adding that it would not be wrong if we think along that line.

The labour union said more worrisome is the fact that the country has a National Assembly that you hardly see all the members seated at every session.

TUC said it is wrong for a Councilors with a secondary school certificate to earn higher than a University Professors.

TUC said if the Federal Government succeeds in borrowing the $29. 9b it applied for our total debt profile would have risen to about $84 billion. The Union the World Bank has warned about the danger and consequences of our debt yet it appears no one cares if the country goes further down in shame.

“The question is, why tax or borrow just to pay politicians and service cronies when over 21 percent of our able bodied youths are unemployed

“We are worried that the insecurity situation arising from unemployment does not bother the politicians.

“We are demanding that the cost of governance be drastically reduced. We do not need 496 lawmakers. Governors do not need over 500 aides. It is too expensive to maintain.

“The salaries and allowances of these public office holders in Nigeria is part of the cause of the economic hardship in Nigeria”, the statement noted.

TUC said half of these political officials’ salaries, could give hundred thousands of unemployed youths useful employment

The Union said if Nigeria will move forward there the need for imminent restructuring of the political system.