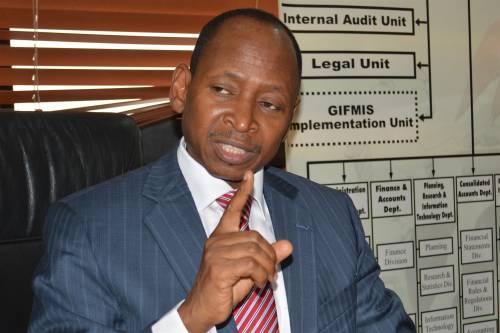 The new Value Added Tax (VAT) rate of 7.5 per cent took effect immediately the new Finance Act 2019 was signed into law by President Muhammadu Buhari on Monday, the Accountant General of the Federation, Ahmed Idris, has said.

Idris, who spoke with journalists in his office in Abuja, said with the coming into effect of the new law, all payments from government treasury, whether approved before the assent of the bill into law or not, will attract the new tax rate.

“In government, you don’t take an action unless there is an approval or legal instrument. No one can jump the gun. There must be a policy in place to back all actions. The budget cannot be implemented unless the National Assembly passes the Appropriation Bill and the President signs it into law.

“For instance, there was a decision (in the 2020 Budget) to increase VAT rate (from 5 to 7.5 per cent). The National Assembly debated on it. Members of the public were sensitized and informed about it. But, nobody could start deducting the 7.5 per cent until the National Assembly approved it and the President signed the Bill into law.

“On Monday the President signed the Finance Bill into law. And just yesterday (Tuesday), I saw a payment, which was prepared in December last year. When I checked the payment was on the VAT rate of 5 per cent. I said no.

“That is that person’s luck. The law has to be obeyed. Otherwise, I can be queried for disobeying the law,” the accountant-general said.

Reminded that the payment was prepared since last year and should be based on 5 per cent VAT rate, Mr Idris disagreed, insisting the actual payment is this year.

“Every payment, which for one reason or another could not be made before the coming into effect of the Finance Act, will now suffer 7.5 per cent charge for VAT, because that is the law as at today,” he clarified.