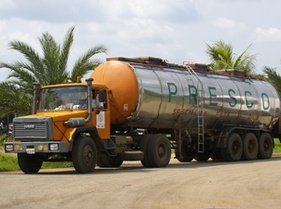 Presco Plc , a key player in the agricultural sector quoted on the Nigerian Stock Exchange (NSE), ended 2019 business year on a positive territory.

Managing Director of Presco, Felix Nwabuko, who commended closure of border by the Federal Government, said the firm recorded more production and sales in the outgoing year as against 2018.

He explained that Presco Plc within the year exceeded the 200,000 tonnes Fresh Fruit Bunches (FFB) target, adding that the company is set to achieve 250,000 tonnes in 2020.

Nwabuko noted that the average selling price of oil palm produce was low because of what he described as “unfavorable market situations’’ occasioned by the failure of other West African Countries to maintain a uniform tariff as provided in the Economic Trade Liberation Scheme.

According to the Presco Boss, with the commissioning of the company’s 350tonnes/day capacity Palm Kernel Crushing Plant; 90tonnes/hour Palm Oil Mill, to be commissioned in January, 2020; 500 metric tonnes/day Refinery and the 30tonnes capacity Shell Boiler, Presco is ready to push more products into the market in 2020

He expressed hope that the future will be brighter for the oil palm industry in Nigeria with the CBN Oil Palm Development Initiative and implementation of the Nigeria Oil Palm Industry Policy.

While commending the R&D Department for its innovations, Nwabuko described the company’s staff as its greatest asset.

He explained that the output from the research work of the R&D is rated as superb by international research institutes.

Nwabuko thanked the entire workforce for their dedications and contributions to the growth of the company.

During the ceremony, the company honoured its long serving staff in the categories of 15, 20, 25 and 30 years for their meritorious service to the company.

Meanwhile, awards were given to best staff of various departments, with Mr. Charles Onwuasoanya emerging as overall best staff for 2019.

Giving the vote of thanks, the Relations Manager, Tony Uwajeh encouraged members of staff to sustain their good work in the coming year.