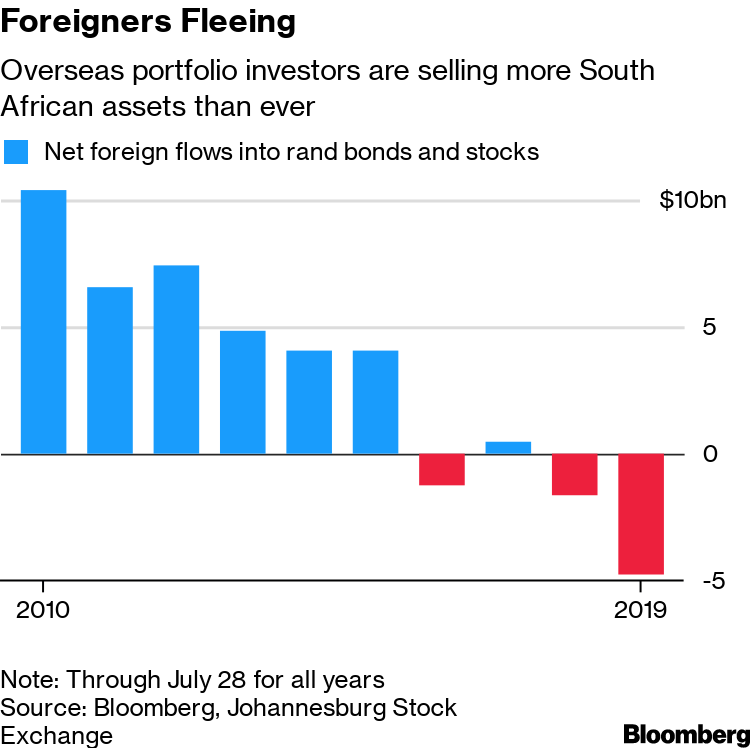 Foreign investors have ditched more than $9.6 billion of South African stocks and bonds this year – the biggest annual selloff in at least a decade, data from the Johannesburg Stock Exchange showed.

But unlike previous selloffs, foreign investors are dumping stocks at a much higher rate than bonds, with high local yields spurring carry trade and providing some support to fixed income, according to analysts.

“Demand for bonds seems like its being stimulated by the systematic rotation out of equities, which makes sense, especially given the attractive yields now on offer in the SAGB market,” said Kieran Siney ETM Analytics.

On Tuesday after economic growth contracted for a second time in three quarters, suggesting 2019 gross domestic product (GDP) will struggle to pass the 1 per cent threshold, foreign investors were net buyers of bonds while equities kept falling.

Even the rand, usually sensitive to growth shocks, shook-off the stark figures after an initial dip and firmed 0.4 per cent on Wednesday morning.

“You look at the carry you’re being offered of 4.5 per cent on 10-year paper in a 4 per cent environment. Leave all else aside, that is an incredibly attractive real yield, full stop,” said chief executive of Cannon Asset Managers, Adrian Saville.

Three U.S. Federal Reserve interest rate cuts and a raft of rate reductions by central banks around the globe have made the return less inflation, or “carry”, on South Africa’s debt attractive to investors desperate for yields.

“We’ve been able to take in our stride without a currency crisis materialising, but it makes you wonder what would happen if the global circumstances changed,” Saville said.

President Cyril Ramaphosa’s failure to jumpstart the economy nearly two years into the job, and the increasing likelihood the country could lose its last investment grade credit rating by early 2020, has dramatically cooled investor appetite.

Moody’s last month kept South Africa on the brink of “junk” status by affirming its ‘Baa3’ rating – the lowest rung of investment grade – revising the outlook to “negative”. Fitch and S&P Global Ratings already relegated South Africa to “junk” in 2017.

And the cost of insuring exposure to South Africa’s sovereign debt has climbed steadily again since late October and accelerated sharply over the past few days. Five-year credit default swaps rose by 7 basis points from last Friday’s close to 195 bps, according to IHS Markit. Data published by the JSE on Monday showed foreign investors between January and the end of November sold more than 112 billion rand of equities and over 29 billion rand of bonds.

Returns on local equities have struggled to break above average inflation of around 5 per cent, while numerous firms have paused dividends and seen profits sink.