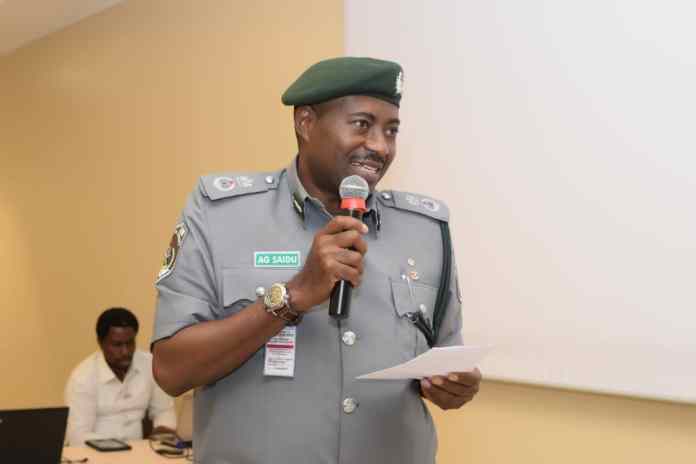 Customs Area Controller of Port Harcourt Area II Command, Onne , Comptroller Aliyu Galadima Saidu has tasked newly promoted officers in his command to rededicate themselves to hard work through and honesty, noting that nothing less is expected of them by God and nation.

Saidu who gave the charge while decorating the newly promoted officers with their new ranks, added that promotions are clarion calls to higher responsibilities. The Commandant, Nigeria Navy School Onne, Commodore A. Olodudu and his Comptroller, Nigeria Immigration Service, Onne, counterpart, Comptroller E. I. B. Inok in their goodwill message during the ceremony echoed Saidus belief that the only acceptable way to appreciate their promotion is to do much more and allow morality and honesty dictate their actions.

Saidu added, “From this moment you should also see yourselves as role models to your subordinates, leading by example and keeping to directives as contained in the Customs and Excise Management Act including other books of instruction.

“The Controller General and Nigeria demands more dedication to duty from us and the motivation of promotion should spur us to do more while also encouraging or stakeholders to be compliant at all times.”

The Onne customs area boss admonished those that were not promoted to continue to work hard and remain optimistic that their time is unchangeable and imminent; while calling on the entire work force to join hands to realize the commands revenue target for the current fiscal year.

“I am optimistic we will have to come together and celebrate again because some other officers will also be promoted. The revenue target and goals of 2019 will be achieved in few weeks time, we must not wait till the end of the year “, he said.