Fayemi: Restructuring ‘unavoidable’ if Nigeria is to progress 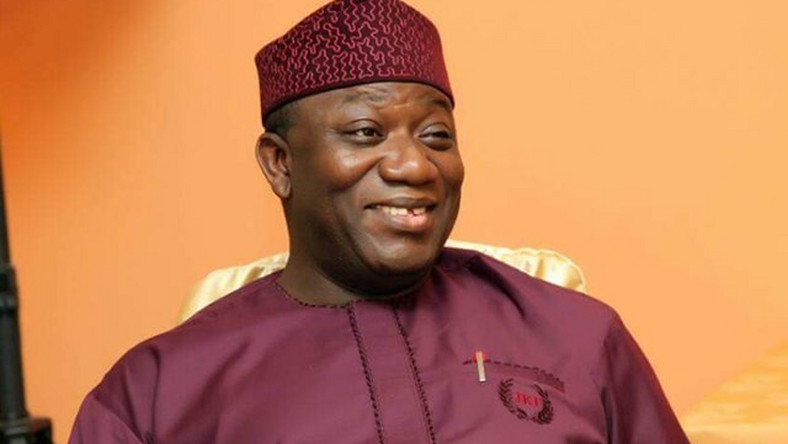 The Ekiti State Governor, Kayode Fayemi, on Wednesday argued for the restructuring of Nigeria, saying it is an “unavoidable step for the creation and sustenance of a participatory, consensus-oriented, accountable, responsive and equitable national governance based on respect for the rule of law.”

Details of Mr Fayemi’s speech were contained in a statement sent to PREMIUM TIMES by Olayinka Oyebode, the governor’s Chief Press Secretary.

In his speech, Mr Fayemi said Nigeria’s ruling party, APC, included restructuring in its 2015 and 2019 manifestoes. He claimed that the party has been working towards it in a bid to use its platform to address the perceived structural imbalance.

The Ekiti State Governor, Kayode Fayemi, has urged Nigerians to always hold their leaders accountable in order to strengthen the nation’s democracy.

Mr Fayemi pointed out that democracy goes beyond the right to choose leaders through the ballot, but stimulating civic engagement to better the lives of the citizens.

The governor stated this on Wednesday while delivering a paper at the United States Institute of Peace (USIP), Washington DC, United States.

He also made a case for a fundamental restructuring of the country as a way of correcting the inherent flaws in the polity.

Governor Fayemi’s lecture was entitled: “Twenty Years of Democracy in Nigeria: Successes and Challenges”, at the event with the theme : Deepening Democratic Governance in Nigeria.

In attendance were Benue State Governor, Samuel Ortom; former Chief of Army Staff, Martin Agwai; former INEC Chairman, Attahiru Jega and a member of House of Representatives, Aishatu Dukku; as well as officials of the U.S. Department of State, scholars and members of the civil society.

While noting that Nigeria has made significant progress as a democracy since returning to civil rule in 1999, Mr Fayemi opined that “democracy is a journey and not a destination” hence the need to address imbalances in the Nigerian federation.

He maintained that a fundamental restructuring of the Nigerian federation is an “unavoidable step for the creation and sustenance of a participatory, consensus-oriented, accountable, responsive and equitable national governance based on respect for the rule of law.”

Mr Fayemi, who is also the Chairman of the Nigeria Governors’ Forum (NGF) explained that his party, the All Progressives Congress (APC) included restructuring in its 2015 and 2019 manifestoes and has been working towards it in a bid to use its platform to address the perceived structural imbalance.

The restructuring, Dr. Fayemi said, must address issues like writing the people’s constitution and the question of constitutional governance, the fundamental precepts of authorising principles of national togetherness, citizenship and national question, the political economy of federalism including the allocation of public revenue, security sector governance, human rights, social justice, electoral system, type of government-parliamentary or presidential, among others.

While urging the Nigerian populace to show more interest in governance and hold their leaders accountable, Mr Fayemi stated that “an indifference might be dangerous for democracy” as Democratic institutions cannot be strengthened in a climate of of apathy and “clinical disengagement.”

Mr Fayemi said: “The current phase of the struggle is therefore not just about maintaining the sanctity of the ballot but also holding those elected accountable and stimulating civic engagement in the public realm, in a way that democratizes ownership and improve the quality of life of our people.

“We must banish the idea that governance is something performed by a team of gifted performers or strong men, while the rest of the citizens are spectators or complainers.” he added.

Mr Fayemi said: “What we established in 1999 is the right to choose our leaders via the ballot. But democracy is more than just the ability to choose one’s leaders. As Larry Diamond argues in his latest book, ’Ill Winds’, it means ‘strong protection for basic liberties, such as freedom of the press, association, assembly, belief and religion; the fair treatment of racial and cultural minorities; a robust rule of law; in which all citizens are equal under the law and no one is above it; an independent judiciary to uphold that principle, trust-worthy law enforcement institutions to check the potential for high government officials to behave corruptly; and a lively civil society made up of independent associations, social movements…’

“But there is a fundamental truth to the saying that politics is too important to be left to politicians. It is about redefining politics itself, transforming it from a rarefied craft reserved for a select few professional politicians, to the protocols and relationships that undergird personal, communal and social wellbeing. In other words, politics is the management of human relationships, interactions and aspirations in the service of the common good. It is not something mysterious that only ‘politicians’ do; it is how citizens operate. Politics is a civic responsibility. It is how we engage with each other. The pursuit of good governance means that politicians can no longer be left to their own devices.

“Before we arrive at that new rapport between the state and society, we must work hard to address a lingering threat, a carry over from the days of military rule. The biggest challenge facing us as democrats is to rebuild trust between the state and society. The relationship between both spheres is often needlessly adversarial owing to a lack of trust. Simply put, Nigerians do not trust their governments and this has made it difficult, indeed in some cases, impossible, to build mass citizen movements for a fuller democratic engagement.”

“The people distrust their governments but not enough to actively check them and avert excesses of power. Rather, they distrust them so much that they desert the state and many simply do not care enough about the public realm. This indifference is dangerous for democracy. Democratic institutions cannot survive or be strengthened in a climate of antipathy nor can politicians long retain their legitimacy under such circumstances. If the price of a free society is eternal vigilance, then apathy will carry a severe penalty for our republic,” he said.

The Ekiti State Governor said looking back on two decades of democratization in Nigeria, “it is instructive to note that only civic movements mobilized in the context of larger patriotic interests can overwhelm the forces of impunity. It is the discipline of civic engagement that will keep at bay those who wish to turn back the hands of the clock and return us to the dark days of totalitarian rule. The struggle we are engaged in is dedicated to making this democracy truly a government of the people, for the people and by the people, and by so doing honour the memory of all those who paid the supreme sacrifice pursuant of our common aspirations for the good society”.

Ambassador Johnnie Carson of the USIP and Mr Agwai led the discussion session after the governor’s presentation.