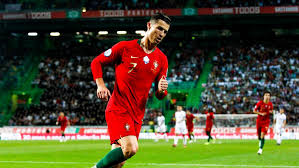 CRISTIANO Ronaldo scored a landmark 700th career goal as Ukraine beat Portugal 2-1 on Monday to clinch a place in the Euro 2020 finals.

Although Ronaldo scored his landmark goal from the penalty spot in the 72nd minute and Taras Stepanenko was sent off, Ukraine held on to secure first place in Group B.

The Portuguese player joins an elite list of players to have scored over 700 goals.

However, according to data from Rec.Sport.Soccer Statistics Foundation, Ronaldo is some way behind the most prolific player of all time, Czech-Austrian Josef Bican.

During his career Ronaldo scored 5 goals while at Sporting Lisbon, 118 goals at English Premiership side Manchester United and an astonishing 450 goals at Real Madrid.

His recent move to Juventus has already seen him score 32 goals in Serie A and 95 goals for Portugal as their highest ever goalscorer.