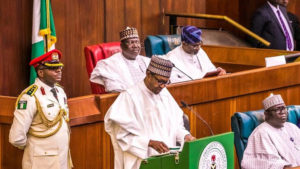 Presenting the Budget proposal, Buhari explained in details effort put in place by the present administration to lift the nation’s economy.

The  budget is predicated plan of crude production of 2.18 million barrels a day and an oil price of $57 per barrel.