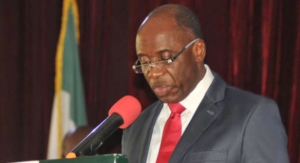 The Minister of Transportation, Mr Rotimi Amaechi, heads of ministries as well as operators in the maritime sector have deliberated on the impact of high cost, inadequate infrastructure and regulations on the efficiency of the sector.

The stakeholders discussed met on these issues at the third Maritime Stakeholders Interactive Forum in Lagos.

The minister, in his opening remarks at the event, said the ministry had continued the rail line projects, which would link the ports and ease cargo movement.

He also said the security of the waterways whose contract was being executed by an Isreali company, HSLI, was on course.

He however urged the contractor to speed up the process, saying that it was slow.

On his part, the Executive Secretary of the Nigerian Shippers’ Council, Hassan Bello, said the council had gone ahead in resolving the issue of demurrage and storage cost with the shipping lines and that they had agreed to cut the cost by 35 per cent.

He pleaded with the government to also prevail upon the Nigeria Customs Service to reduce their cost as it was making the Nigerian ports very uncompetitive and chasing importers to ports of neighbouring countries.

Bello said a lot of progress had been made with the dry port in Kaduna and 250 containers were being moved there by rail every week.

He however expressed concern that the speed of the train was slow at 40 kilometres per hour.

The Managing Director of the Nigerian Ports Authority, Ms Hadiza Bala-Usman, called on the relevant authorities to put in place facilities to enhance cargo clearance at the seaport.

She lamented the absence of functional scanners at the ports and urged the government to purchase sufficient scanners needed to ensure efficiency at the ports.

She also emphasised the need to speed up work on the deep seaports being constructed across the country, saying that the river ports in the country were not useful for berthing large vessels as they could not be dredged beyond their seven metre capacity.

Bala-Usman decried the huge volume of unclaimed cargo at the ports, urging the Customs to evacuate them from the ports as they were struggling to accommodate overtime cargo.

The last time the auction of overtime cargo was done was in 2015, she noted.

The NPA MD raised the issue of abandoned vessels, pointing out that they were strewn all over the Nigerian waterways.

She called for a policy that would stipulate that shipping firms should have wreck insurance, so that if they abandoned their vessels on the Nigerian waterways, their insurance companies would be made to bear the cost of removing them.

The Acting Managing Director, Nigerian Inland Waterways Authority, Danladi Ibrahim, said the agency had acquired ambulances and other facilities to take care of accidents on the waterways while also prosecuting erring boat owners and managers who caused the accidents.

He said the processes of the agency were being automated while the company had collaborated with the NPA to move containers in barges to jetties around the ports.

He said the concession of Onitsha port would be completed by October.

He said his team had had to block many of the illegal routes but lamented that more were still being created by the communities.